Thank you to the children for bringing their bears to school. 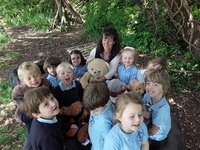 We received a letter from the bear to say that he wasn't trying to chase the family from the story...but that he wanted to play hide and seek! We helped the bear to find his other bear friends. We found a polar bear, a panda, a moon bear and a spectacled bear!

We talked about similarities and differences between the bears and where they live around the world.

As we played hide and seek, we had fun acting out a new version of the story, based on our school grounds.