To summarise our Geography Topic learning we watched some clips from the TV show 'A Place in the Sun Home or Away' where a lady from Ashburton was trying to decide if she wanted to live in Bishopsteignton or in Spain. 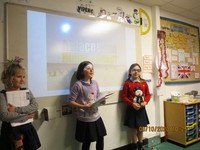 We used this as inspiration to create our own TV show comparing Teignmouth to Spain!

The children thought of reasons for and against living in each place. This allowed them to show off their comparing and contrasting skills. The children then performed their TV show in front of the rest of the class!

We use necessary cookies to make our site work. We'd also like to set optional analytics cookies to help us improve it. We won't set optional cookies unless you enable them. Using this tool will set a cookie on your device to remember your preferences.

Necessary cookies enable core functionality such as security, network management, and accessibility. You may disable these by changing your browser settings, but this may affect how the website functions.