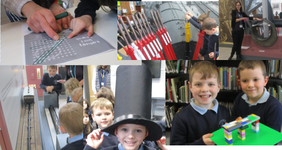 The children had a fantastic time and represented our school brilliantly. In the museum, we explored their railway collection and found out more about Brunel and the Atmospheric Railway. We also got to handle lots of sources of historical evidence which helped us to learn more about the Great Western Railway. Our favourite part was using the train signal levers!

In the library, we visited their Railway Room which boasts thousands of books about the trains. The children took part in some fun activities here, such as building a bridge strong enough to hold a book as well as completing puzzles to solve a railway trail.

We use necessary cookies to make our site work. We'd also like to set optional analytics cookies to help us improve it. We won't set optional cookies unless you enable them. Using this tool will set a cookie on your device to remember your preferences.

Necessary cookies enable core functionality such as security, network management, and accessibility. You may disable these by changing your browser settings, but this may affect how the website functions.